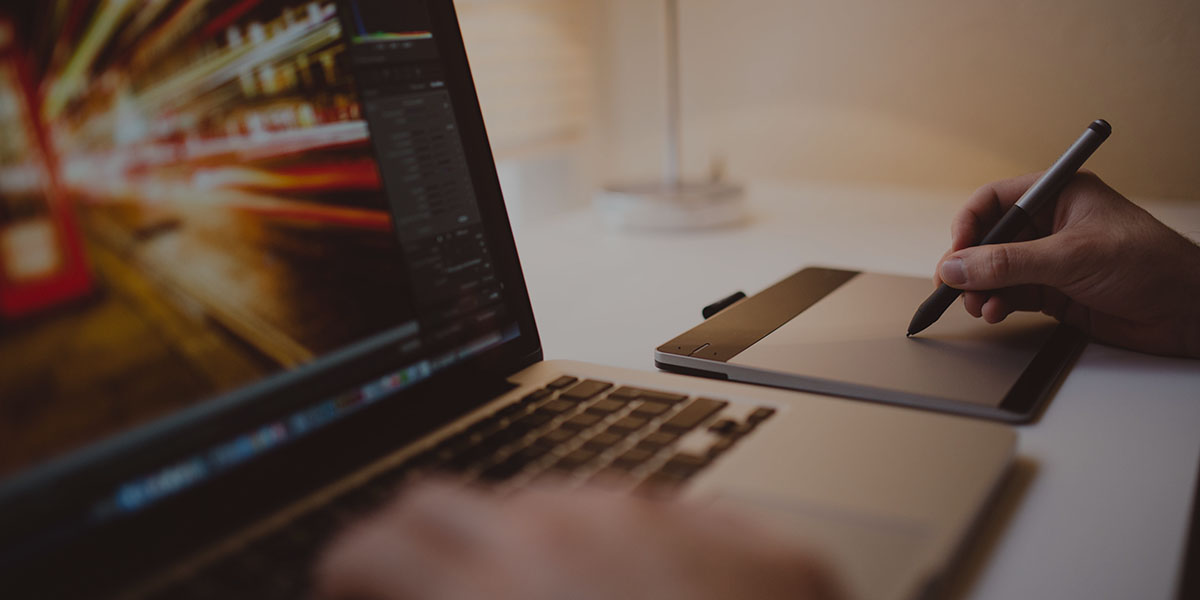 One of my favourite brands is Apple

They own the entire ‘less is more’ schtick and have been used as reference on pretty much every brief I’ve been privy to. When a client says to me “Make it like the apple website!” I know I’ll have my work cut out for me.

Not that there’s anything inherently wrong with aspiring to be like Apple (if only numerous brands would have adhered to the ‘less is more’ analogy a lot sooner). However, it’s a double-edged sword: once inspiration has transpired en-masse into the marketing communications and brand websites of every tech, FMCG and sports brand in existence, suddenly what used to be cutting-edge is now 50 Shades of Vanilla.

Derivatives are commonplace in the design world and more importantly, they are a necessity — they are what turn experimentation into trends. We also need to understand the past and present before being able to evolve.

A quote that is beginning to sound as though it perhaps died with him. Well, at least the second half of it may have. Modern design is becoming an exercise in being on trend rather than being innovative or heaven forbid — functional.

Breaking design convention and going against the grain is all well and good if you’re creating a website for your dog, producing a nightclub flyer or entering a poster design competition for your local college, but when it comes to designing a piece of communication that needs to be useful and easily read from a distance, basic design principles should be adhered to.

As an example, the new TV overlays for Channel 9’s morning show (Today) are sporting all-caps in an ultra-thin typeface (probably Helvetica). Certainly these might look great in print — especially in magazines such as Cool Type Design Monthly (which may not exist), but when you’re running late for work and need to quickly glance at the headlines, this type of typographic brutality needs to be slapped down with liberal amounts of the Functionality Stick™.

Simply, when you’re talking multiple headlines in succession, this kind of all-caps douche-baggery is bordering on mosquito levels of annoyance. But should Apple be blamed for the thin type-face trend? Not entirely, but they are certainly a key stake-holder in its influence.

Channel Nine’s Today Show: Why the over-sized thin capitals for important headlines? Why so many capitals to begin with?

Another instance of form overriding function can be found on the Sydney Trains platform timetables now found at any train station in Sydney’s metro area. They have been re-designed, and I’d argue, not entirely for the better. Sure, they are clean and white, but from a distance when you’re bolting for the train, they are insufferable and likely to cause a conniption. 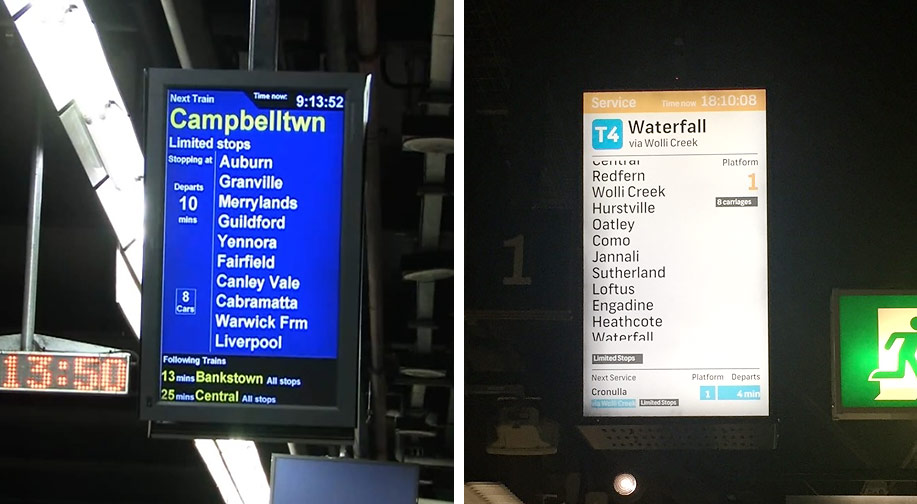 Don’t get me wrong, the old blue timetables weren’t about to win design awards any time soon, but at least you could read essential data from 50 meters away. Thankfully, and most likely due to pissed-off elderly customer feedback, the typefaces have been upped in weight and size significantly to a medium/bold (as pictured).

I still have epic levels of ‘gripe’ with type reversed out of light blue and pale orange, but I digress…. 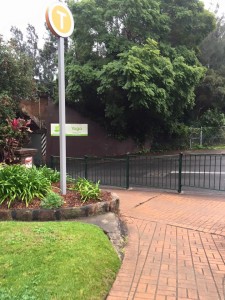 Station Signage: Let’s not let clear communication get in the way of design now shall we?

Minimal can be a hindrance

Sydney Trains timetable designs are just the tip of the iceberg. Their current train station signage (that being of a large capital ‘T’ which means ‘Tram’ in Melbourne and perhaps ‘Taxi’ in other cultures) is a complete design fail. Perhaps the full word would have been more helpful rather than the minimalist approach? Yes. Yes it would have.

As with most iconography — if you have to ask what it means, it’s probably not doing it’s job.

Where my gripe with Apple really stems from

Initially when iOS 7 landed, iPhones the world over sported the thinnest form of Helvetica Neue known to man. Understandably there was severe (albeit polarising) public backlash with teems of design aficionados and UI specialists alike, either on bended-knee circle-jerking to it’s genius inclusion, or more widely, scores of skeuomorphic constituents lambasting Johnny Ive’s sudden penchant for ‘flattened’ design nuance. I myself, happen to fall in the latter camp (at the time) with the caveat being — I’ve slowly come to terms with it, and the interface has evolved  into a much more readable and consistent user experience (largely due to the increased font weights and consistent iconographic styles).

We can’t all be Apple

Apple has the luxury of being able to throw design grenades into a market that they largely own, piss off a few people, then finally justify it later on with scores of updates and improvements. Smaller brands don’t have such a luxury and can be quickly burnt at the stake and forgotten faster than you can say #trendingontwitter.

When function and form comes together in equal harmonious balance, it becomes exceptional design which has the ability to dictate how we react and interact with our surroundings on a multitude of levels. Progress doesn’t mean taking a functional backwards step for the sake of sexy design, nor does it mean aligning design cues to every other Tom, Dick or Harry in order to feel current — if you need to break current design trends for functionality or dare I say it readability then so be it — please save the ultra-thin typefaces for another time and place.

How to stand out amongst the Apple wannabes

Call for a free consultation

In a world where Apple sets the standard for design (and most seem to follow) it pays to set yourself apart. Call Demon on 1300 85 84 30 to tee up a coffee and talk through your business objectives. Or visit our contact page at the below link.

Clint is the Founder and Creative Director of Demon having over 17 years experience in branding, design and marketing under his belt.

Rather cut to the chase and have a coffee? Call us now